When asked where they want their energy to come from, Arizonans and Nevadans are crystal clear: they want more clean electricity like wind and solar, and less fossil fuels. But Southwest Gas – the region’s largest gas utility – is working overtime to keep the region hooked on its methane gas.

Whether through backroom lobbying of politicians or ad campaigns flooding your social media feed, Southwest Gas is doing everything it can to slow the transition to clean energy and keep its methane – and hundreds of millions in profits – flowing.

According to recent reporting by the non-profit utility watchdog Energy and Policy Institute, the company is paying social media “influencers” on TikTok, Instagram and Facebook to rave about the supposed benefits of cooking with gas, without disclosing its involvement – a potential violation of Federal Trade Commission guidelines on truth in advertising.

In other ads, influencers paid by Southwest Gas tout its use of a tiny amount of so-called “renewable natural gas” (methane captured from industrial waste lagoons, garbage dumps and sewage treatment plants) as well as hydrogen in its pipelines. Study after study after study show that these “alternative” fuels are expensive distractions that don’t meaningfully reduce climate pollution or address any of the health and safety threats that come with gas appliances in homes, schools and businesses.

The company is also a huge player in Arizona and Nevada politics – donating vast sums of money to political candidates on both sides of the aisle and using its influence to slow down efforts to move the region to clean electricity.

In 2020, the company backed a bill that stripped cities in Arizona of the ability to update building codes to embrace cleaner, safer electric appliances in new construction. The Arizona legislature – led by politicians that had each received $4,500 donations from Southwest Gas or its political action committee – swiftly passed the bill despite the fact that no Arizona cities were even considering all-electric building codes at the time.

Because of this, many new homes in Arizona will continue to be built to be dependent on methane gas, which means higher housing costs and higher monthly energy bills compared to homes built with all-electric heat pumps, according to a study by the Southwest Energy Efficiency Project. It also means that Arizona families will continue to live with higher levels of indoor air pollution from gas stoves, which release chemicals linked to cancer and childhood asthma. But for Southwest Gas executives and shareholders, it means more profits. 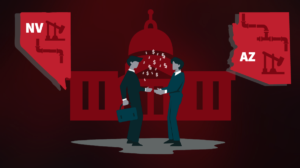 The company has similarly meddled in Nevada politics to ensure its methane keeps flowing. In 2021 it unsuccessfully pushed a bill that would have given the utility a blank check to build new pipelines and pass billions in costs on to the public.

It also helped kill a separate bill that would have required the utility to align its spending with the state’s long-term climate goals and prove that spending on new pipelines was justified. Earlier this year, the company spent heavily in the primary to try to unseat the legislator that introduced that bill.

Higher bills for you, more money for Southwest Gas

Like all gas utilities, Southwest Gas makes profit for its shareholders and executives by building new gas infrastructure – pipelines, compressor stations and storage facilities – and then passing those costs on to its customers along with a 9-10% “rate of return” that goes directly to executives and shareholders. The company has spent heavily in recent years to try and lock in more gas infrastructure, even as more and more Americans ditch gas appliances in their homes and move towards cleaner, more efficient electric options like heat pumps and induction stove tops.

The company is currently seeking an 11.5% rate increase in Arizona, even after receiving a 9.7% increase in 2020. In addition to the costs of new pipelines that will lock in the region’s fossil fuel dependence for decades to come, the rate requests include membership dues to the American Gas Association, which lobbies for fossil fuel expansion across the country and helped coordinate bills stripping cities of the ability to embrace clean electricity in new construction.

These rate hikes are just the latest in a series of cash grabs by Southwest Gas that have corresponded with huge increases in compensation to their executives. According to filings with the Securities and Exchange Commission, Southwest Gas executives have increased their salaries by more than $6 million since 2009. As of 2019, the average annual salary of a Southwest Gas top executive was more than $2.7 million — more than 54 times the annual mean wage of workers in Arizona and Nevada, according to the Bureau of Labor Statistics.

The company even tried to make its customers fund their board members’ and executives’ extravagant lifestyles, including $4,700 dinners ($1,500 just for alcohol!) and $1,600 for regular 10-minute chair massages and a golf club membership. Luckily, Nevada regulators put a stop to this.

A clean energy future has no room for Southwest Gas

There is no debate among people who study the climate crisis – the best way to avoid the worst outcomes is to stop using dirty gas to power our electric grid and our homes. That’s an inconvenient truth for companies like Southwest Gas, whose business model relies on selling methane – a climate super pollutant more than 80 times as potent as carbon dioxide, which leaks constantly from fracking wells, gas pipelines and even the appliances in your home.

Arizona and Nevada have almost an immense amount of opportunity to produce clean electricity in-state – particularly solar power, which creates thousands of local jobs and billions in economic activity. But that potential is held back by the state’s reliance on Southwest Gas’s methane, most of which is imported from oil and gas drilling operations in the Permian Basin, Rockies and Canada.

Arizona and Nevada families are already feeling the impacts of the climate crisis – whether its smoke from out of control wildfires, worsening heatwaves, or the drying up of the Colorado River. Southwest Gas’s methane is making these disasters worse and the company is using its political power and immense profits to try to halt the transition to cleaner, safer energy.