Pay a gas bill? You could be funding fossil fuel lobbyists

Pay a gas bill? You could be funding fossil fuel lobbyists

The fine print of your monthly energy bills likely contains lots of small surcharges and extra fees from your utility. But there’s one they don’t list that should anger anyone who is a fan of clean air, a stable climate and a healthy democracy.

Just about every gas utility in the country is a member of the American Gas Association, and most use money fromtheir customers’ bills to pay their membership fees. That means that  approximately 70 million people may be paying for the AGA’s army of lobbyists and misleading advertising every month, without ever knowing it. That’s unacceptable at a time when the price of “natural” gas has nearly tripled and 1 in 5 Americans are struggling to pay their high energy bills.

While the AGA describes itself as just a “trade association,” in reality it has been actively involved in politics, undermining efforts to move away from fossil fuels like methane gas and towards clean electricity. 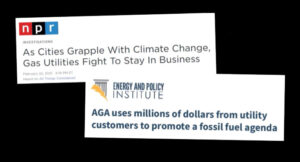 According to reporting from NPR, the AGA has helped push state bills that strip local cities of the ability to require new buildings be built with all-electric appliances, which climate studies say is the best way to reduce fossil fuel use at the pace necessary to avoid catastrophic climate change. More than 20 states have passed these “preemption” laws, which take away local control and keep American families dependent on “natural” (methane) gas.

The AGA has also spent decades flooding the airwaves with pro-gas advertising to try and keep us hooked on their toxic product. In the 1930s, the AGA partnered with celebrities to use the catchphrase “now you’re cooking with gas” to promote gas stoves over their electric competitors. Today, the AGA is paying social media influencers to promote gas appliances on Instagram. This misleading playbook is being repeated by gas utilities across the country – most recently Southwest Gas in Arizona and Nevada.

Luckily, there’s an opportunity to put a stop to this backdoor subsidy to the gas industry. The Federal Energy Regulatory Commission (FERC) is considering whether to tighten rules to prevent gas utilities from charging their customers for membership to the AGA and similar trade groups.

FERC already forbids utilities from making consumers pay for direct lobbying by the utility itself, but doesn’t have clear guidelines on lobbying by third-party industry groups like the AGA. This leaves oversight responsibility to state regulators, who have largely failed to impose any real consequences for gas utilities, even when they’re caught red-handed misusing customer funds.

With the price of gas through the roof, the industry and their executives are making record profits. Last year 28 of the largest oil and gas CEOs took home a collective $394 million in compensation, while paying out billions in stock buybacks that enrich their investors. They can afford to pay for advertising and lobbying out of their own pockets without forcing struggling American families to pay for it every month.

To make your voice heard, sign this petition from the Center For Biological Diversity telling FERC that it’s time to protect the public from having to fund advocacy on behalf of the fossil fuel industry.