We’ve Been Gaslit by “Natural” Gas!

We’ve Been Gaslit by “Natural” Gas!

You’ve probably heard the term “gaslighting.” It’s when someone tries to confuse another person by making them doubt and question reality.

It turns out it’s not just for toxic relationships anymore! The fossil fuel industry has officially gaslit us about the reality of “natural” gas. 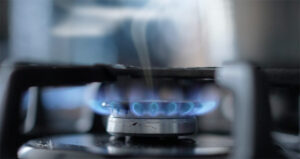 There’s nothing “natural” about natural gas. It’s actually methane, a poisonous, toxic fossil fuel that puts our communities, climate, and children at risk. It primarily comes from fracking – an environmentally destructive process where the fossil fuel industry forces water and chemicals into the ground to force out oil and gas, polluting water and contributing to earthquakes in the process.

But the corporations and well-paid executives who profit off methane gas have denied that reality for years – telling us it’s safe, affordable, and oh-so clean. Don’t be fooled: it’s all a marketing trick used to disguise the fact that methane gas is explosive, unhealthy and contributing to the climate crisis.

And on top of all that, it’s burning a hole in our wallets. Methane gas has tripled in cost in the last year, making everything more expensive, from heating our homes to cooking. It’s not just hitting those of us with gas appliances in our homes either – electricity prices are up across the board because utilities are still too dependent on a volatile commodity like gas.

We’re paying more for a product that is actively polluting the air in our homes. Studies have shown that gas stoves leak methane gas even when they’re turned off, releasing chemicals that are linked to cancer, cardiovascular disease, and childhood asthma. Somehow gas executives always forget to mention that.

Methane is also a huge driver of the extreme weather we’re all seeing these days – it’s more than 80 times as potent a greenhouse gas as carbon dioxide and responsible for at least 30 percent of global warming to date. And it leaks constantly from fracking drill sites, pipelines, storage facilities and the appliances in our homes. Add all that up and it turns out that methane gas is worse for the climate than coal.

It’s time to put a stop to the gas industry’s gaslighting and misinformation. Methane gas isn’t good for our wallets, our health, or the climate.