Today people from across the country are rallying in Washington to pressure Congress to say no to one of the most egregious handouts ever given to the fossil fuel industry.

The Inflation Reduction Act, passed by Congress last month, included many important clean energy investments that will help wean the country off polluting methane gas in the coming years. But in exchange for his support for the deal, West Virginia Senator Joe Manchin also demanded some political favors for a specific gas pipeline that the industry is pushing through Appalachia. 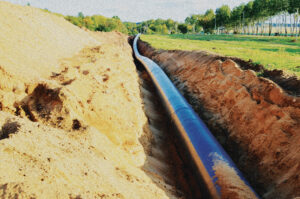 If completed, the 303-mile Mountain Valley Pipeline would send fracked gas from West Virginia to Virginia, emitting as many greenhouse gasses as 26 new coal plants in the process. The pipeline would threaten hundreds of streams, rivers and erosion-prone steep slopes, and would perpetuate environmental injustice by locating polluting compressor stations in Black communities.

But Manchin, who has received the most political donations from gas pipeline companies of anyone in DC, demanded that Congress intervene in typically non-political regulatory decisions and rubberstamp the permits needed for pipeline’s completion. Manchin’s demands were circulated in a draft bill with a watermark reading “Draft – API” – an apparent reference to the American Petroleum Institute, the oil and gas industry’s biggest lobbying arm, which may have been involved in the drafting.

Manchin also called for Congress to take on so-called “permitting reform” that could open the door for the rollback of bedrock environmental laws and make it easier for the gas industry to push through similar pipeline and gas export projects going forward.

Despite the fossil fuel industry’s rhetoric, getting regulatory approval for new gas pipelines has rarely been a problem – the Federal Energy Regulatory Commission has denied a grand total of 2 pipeline projects in the last 20 years, while approving more than 500.

The real challenge for projects like Mountain Valley Pipeline is that the world is moving away from their polluting product. Even before the price of gas tripled this year, utilities were moving to cheaper, cleaner options like wind, solar and battery storage. The passage of the Inflation Reduction Act, which included multiple measures to support the growth and lower the cost of clean energy technology, will only accelerate the transition away from volatile, risky fuels like methane gas.

For the pipeline companies nervously watching this transition, it’s now or never to get projects like the Mountain Valley Pipeline built. For people concerned about a healthy, climate-safe future, it’s vital that we quit letting politicians cut corners for the gas industry, and sacrifice frontline communities in the process.

Click here to tell your member of Congress to put a stop to this dirty pipeline deal!