As more and more of the world embraces clean electricity in their homes instead of “natural” gas, the gas industry is trying desperately to get ahead of the cultural shifts away from their polluting product. Their latest strategy borrows straight from the tobacco industry playbook – market their dirty product to the next generation.

The gas industry has repeatedly been caught circulating coloring books and reading materials in schools around the country, from Massachusetts to Washington to Oklahoma to Oregon. While industry representatives usually suggest that the effort is simply about educating kids about safety, the materials aren’t subtle in their attempts to get children to develop positive associations with methane gas – a climate super-pollutant responsible for at least 30% of global warming thus far. The materials use kid-friendly things like dinosaurs, pizza and “invisible friends” to try to convince children that gas is clean and safe. 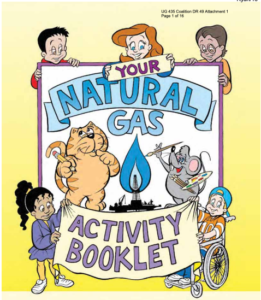 Last month these tactics prompted six elected officials and 30 community groups in Oregon to ask the state’s Attorney General to investigate local gas utility NW Natural for false and misleading advertising, including the utility’s materials aimed at children and sent to schools around the state. The AG’s office said the group’s petition “merits review” – a possible precursor to a wider investigation.

This is only the latest example of gas utilities sending pro-gas propaganda to schools:

As if it weren’t bad enough that this kind of industry indoctrination is finding its way into our schools, parents may be unwittingly paying for it in their monthly energy bills. Since gas utilities typically characterize these materials as being about safety education, state regulators often allow them to recoup the production costs through higher rates. In the case of NW Natural, the utility has filed for multiple rate hikes that would raise their customers’ monthly bills by more than 42% – including additional money to pay for advertising like the school pamphlets.

The science is clear: if we want our kids to avoid a future of escalating extreme weather disasters, we need to transition off fossil fuels as quickly as possible. Not just coal and oil, but also the methane gas that is used to operate furnaces, water heaters and stoves in half the homes in the United States. Our kids deserve clean air, a stable climate and to be able to go to school without being subjected to fossil fuel propaganda.