There’s a growing energy affordability crisis that is putting millions of Americans at risk of eviction and having their lights turned off by their utilities. And it’s being driven by a specific energy source that the fossil fuel industry constantly tells us is the “affordable” option: “natural” gas. 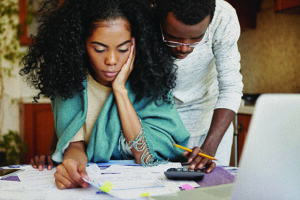 The cost of gas tripled this year and utilities are starting to pass those higher costs on to the public by raising rates on their customers. This sudden price shock isn’t just being felt by people who have gas appliances in their homes – it’s also driving up energy prices across the board. NPR reports that the price of electricity rose by nearly 16% last year – due mostly to higher fuel prices for the gas that many utilities burn to produce electricity.

For Americans with stable jobs and some savings, these higher energy bills are mostly an annoyance – they mean cutting back a little spending here or there. But for millions of Americans living from paycheck to paycheck, a higher energy bill can be the difference between putting food on the table, affording life-saving medicine or paying rent or mortgage.

This year’s skyrocketing price of gas is taking this national crisis and making it worse. 20 million Americans – nearly 1 in 6 American households – are now behind on their energy bills and at risk of having their electricity shut off. The National Energy Assistance Directors Association – which represents energy assistance administrators from states across the country – told Bloomberg News that this moment is “the worst energy affordability crisis the group has ever documented.”

The consequences of these high energy burdens aren’t equally shared – a survey by Indiana University found Black and Latino households were 80% and 30%, respectively, more likely to have their service disconnected by their utility provider than white households. Another study by the American Council for an Energy-Efficient Economy found that Black, Latino and Native American households spend 20-45 percent more of their income on energy bills than white households. Due to historic housing discrimination and redlining, communities of color are more likely to live in older housing stock with inefficient appliances, which means more energy use and higher bills.

And it’s not just gas’s high price driving up energy bills, it’s also its impact on the climate. Gas is primarily methane, a climate super-pollutant more than 80 times as potent as carbon dioxide and responsible for at least 30 percent of the warmer temperatures in recent years. Methane leaks from just about every part of the gas system – from fracking wells to pipelines to the stoves in our homes – and goes straight into the atmosphere, where it worsens extreme weather. As climate-driven heat waves get worse, people need to use more energy to stay cool and safe in their homes, which drives their bills even higher. It’s a vicious cycle, all being driven by the gas industry.

While millions of Americans struggle with their energy bills, utility executives are raking it in. According to a report from Bailout Watch and Center For Biological Diversity, 12 of the largest utilities in the country spent 2020 taking home hundreds of millions of dollars in federal bailout funds, increasing payouts to their investors by 13% and compensation for their executives by an average of 24%, while laying off employees and cutting off power to people at least 3.2 million times.

Losing access to electricity can be a life or death matter during a heat wave, but keeping people connected to it is a minor financial inconvenience, at worst, for utilities. The Bailout Watch/Center For Biological Diversity report found that utilities could have covered the costs of keeping people connected for power for just 18% of the additional payouts they gave to their investors in 2020.

So what’s to be done? Immediately, we need more funding for energy assistance programs that help low-income people pay their bills and fund weatherization and energy efficiency upgrades to homes, including ultra-efficient electric heat pumps and induction stoves.

We also need to pass laws that prevent utilities from shutting off essential services like electricity for non-payment, as Reps. Cori Bush of Missouri, Rashida Tlaib of Michigan and Jamaal Bowman of New York have called for.

More broadly, we need to move to an energy system that isn’t so dependent on methane gas, which is accelerating the climate crisis and is prone to these kinds of sudden price spikes. The wind and the sun didn’t suddenly get more expensive, and allowing more people to access clean electricity protects them from the volatility of life on fossil fuels.