NW Natural is an obstacle to Oregon’s clean energy future

NW Natural is an obstacle to Oregon’s clean energy future

Oregon has made huge strides away from fossil fuels in recent years – from an ambitious statewide bill to transition to 100% clean electricity to cutting-edge city programs like the Portland Clean Energy Fund, which invests in all-electric appliances to lower the monthly bills and clean the air in communities of color. 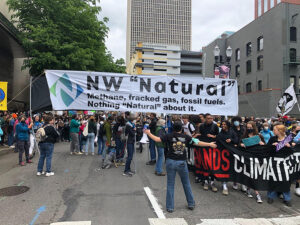 But even as the state moves away from fossil fuels, its largest gas utility keeps sinking money into expanding its system of “natural” gas pipelines, and passing the extra costs on to Oregon families through higher energy bills. Simply put, NW Natural’s business model is incompatible with Oregon’s clean energy future.

NW Natural, which pumps methane gas into nearly 780,000 homes, schools and businesses in Western Oregon, just raised their customers’ monthly bills by 14% and is planning another rate increase early next year. If approved, the company’s rates will have risen by a shocking 42% in a little more than a year in a state where more than 1 in 4 residents struggle to pay their monthly energy bills. Meanwhile, NW Natural is handsomely rewarding its executives – the company’s President made $3.7 million in total compensation last year, according to records filed with the Securities and Exchange Commission.

If it had been up to NW Natural, these rate hikes would have been even more extreme. Luckily, community advocates were able to convince state regulators to say no to NW Natural’s request to make their customers pay the salaries of the company’s lobbyists. NW Natural has been engaged in a protracted effort to dissuade local leaders in cities like Eugene and Milwaukie from passing healthier building codes that ensure new construction is built with cleaner, safer, more efficient electric appliances like heat pumps and induction stoves.

The company was also seeking to raise rates even higher to make its existing customers cover the costs of hooking up new buildings to the gas pipeline system – also known as “line extension subsidies.” Unfortunately, state regulators left this backdoor fossil fuel subsidy in place, but significantly reduced the amount that NW Natural could recoup from its customers in the coming years.

The company’s long-term plans still call for adding 137,000 new customers to its gas system between now and 2035, which would all but doom the state’s goal to reduce its climate pollution by 80% by 2050. Each new home built with gas appliances is another home burning methane gas — a climate super-pollutant more than 80 times as potent as carbon dioxide — for 20 or more years.

NW Natural has invested heavily into advertising to clean up its image, but some of its tactics have landed the company in hot water. The Oregon Attorney General’s office is investigating the company after it was caught circulating coloring books in Oregon schools that portray gas as “clean” and beneficial, using cartoons and other kid-friendly tactics.

Left out of the company’s ads is the fact that methane gas is a threat to the health of Oregonians — studies have found cancer-causing toxins like benzene in it, and kids who grow up in homes with gas stoves have an elevated risk of developing asthma.

The company is also trying hard to convince the public and elected leaders that it can clean up the product it sells. NW Natural touts the fact that it uses biogas – methane captured from industrial farms, garbage dumps and sewage treatment plants. But according to the company’s most recent long-range plan, biogas makes up less than 1% of their current gas supply. The other 99% consists of conventional methane gas, which primarily comes from fracking operations in Canada or the US Rockies.

Trying to experiment on marginalized communities

NW Natural is also hyping hydrogen, which doesn’t produce carbon dioxide when burned and could theoretically be produced without the use of fossil fuels. Gas utilities around the country are considering blending hydrogen into their methane gas pipelines, despite plentiful evidence that the idea is an expensive distraction from the real solution: clean electricity.

But hydrogen is more prone to leaks and explosions than methane and could worsen air pollution from stoves inside peoples’ homes, since burning hydrogen produces more nitrogen oxides than burning methane. The American Medical Association has warned that hydrogen blending “puts lives at risk.”

And since it can cause steel pipelines to degrade and break, using more than a trivial amount of it in the gas system would require replacing most of the pipeline system and every gas appliance in our homes. That’s an unfathomable cost when modern electric appliances are available right now, reduce monthly energy bills and will soon qualify for thousands of dollars of tax rebates thanks to the passage of the Inflation Reduction Act.

Despite these many red flags, this summer NW Natural tried to experiment with blending hydrogen into the pipelines of a Eugene neighborhood that already lives with elevated levels of air pollution from heavy industry and is home to more low-income families and people of color than anywhere else in the city. The company quickly halted the project after pushback from a coalition of community advocates, including NAACP of Eugene-Springfield, Beyond Toxics, Oregon Physicians for Social Responsibility and the Springfield-Eugene Tenants Association. But the company could reintroduce it in the coming months.

NW Natural is headed in a different direction than the rest of Oregon. While Oregon is embracing a future of clean electricity, cleaner indoor air and fewer extreme weather disasters driven by the climate crisis, NW Natural is doubling down on fossil fuels by making more people dependent on its methane gas. It’s up to Oregonians to say “No” to the expansion of this fossil fuel corporation and instead transition homes and buildings to run on clean, renewable electricity.