In Glass Onion, the new Netflix sequel to the popular murder mystery Knives Out, a wealthy billionaire concocts a scheme to pipe explosive hydrogen gas into peoples’ homes. Spoiler alert: the consequences are deadly.

Shockingly, this scenario isn’t just Hollywood fiction. Faced with increasing pressure to look like they’re reducing climate pollution from their operations, “natural” gas utilities across the country are experimenting with blending hydrogen into their pipeline systems. The industry is pushing this scheme despite ample evidence that hydrogen is even more prone to leaks and explosions than methane gas, which already routinely hurts and kills people.

Hydrogen is seen by many as a potential source of clean energy, because it doesn’t release any greenhouse gasses when it is burned. (Though just like methane gas it does release nitrogen dioxides – a key driver of asthma and other respiratory health problems.) If we were able to produce hydrogen with clean electricity like wind and solar (still a big “if,” considering that 99% of current hydrogen is produced by burning fossil fuels like methane), it could be an option for reducing climate pollution from sources that currently use lots of fossil fuels — industrial processes, planes and cargo ships, for example. 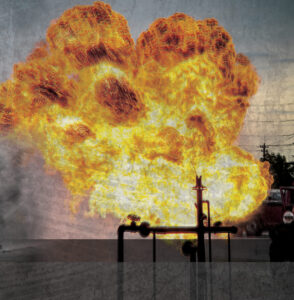 But regardless of how it is produced, hydrogen has a giant skeleton in the closet — it’s highly explosive. Hydrogen is a smaller molecule than methane, which makes it more likely to leak from holes in pipes in our homes and can contribute to “embrittlement” of steel pipes. And once hydrogen leaks, it can ignite more easily than methane gas. One study found that if hydrogen were used in homes to replace gas, the annual predicted number of explosions would more than quadruple.

The elevated risks of explosions and the potential increase in air pollution from gas appliances has doctors and public health experts raising the alarm about hydrogen blending. The American Medical Association recently came out against the practice, warning that it “puts lives at risk.”

Despite these red flags, the gas industry is rushing forward with plans to blend hydrogen into their pipeline systems — usually without consent from their customers.

But people are fighting back. Oregon’s largest gas utility, NW Natural, was recently forced to withdraw their hydrogen blending plans in Eugene after pushback from community groups, including NAACP of Eugene-Springfield and Oregon Physicians for Social Responsibility and Beyond Toxics. NW Natural had targeted the experiment in a neighborhood that was disproportionately home to low-income families and communities of color.

​​“Eugene residents will not be forced to be guinea pigs for experimental and dangerous technology that perpetrates fossil fuel infrastructure, environmental injustices and more air toxics,” Lisa Arkin, executive director of Beyond Toxics, told the Oregon Capital Chronicle.

The truth is that we don’t need risky new technologies in order to reduce the contributions our buildings make to the climate crisis. Cleaner, safer all-electric heat pumps, water heaters and induction stoves are widely available right now, and are now even more affordable to install given federal tax incentives passed in the Inflation Reduction Act last year. It’s time to say no to the gas industry’s dangerous hydrogen schemes.