When it comes to “natural” gas, the fossil fuel industry has used variations of the same marketing pitch for decades: gas is a “bridge fuel” that can get us away from coal and oil until renewable energy is “ready.” Even as wind and solar proved its readiness by becoming the cheapest and fastest growing sources of new energy in recent years, the industry still repeats it like a mantra. 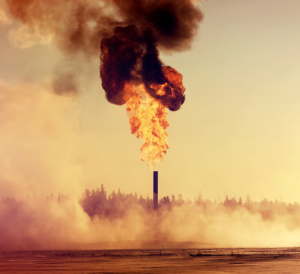 Last Friday, the House Oversight Committee dropped a bombshell that should put the “bridge fuel” concept to rest for good. The committee released internal oil and gas industry documents, acquired through subpoena, that show that the industry sees gas as the “destination,” not just the bridge. The documents show a concerted effort to make gas — and its immense harms to the climate and public health — a bigger part of our energy system for decades to come, not just in the short term.

An internal document at BP America titled Role of Gas said the company’s goal was to “prevent further erosion of near-term support for gas vs. other fuels, protect the role of gas as a bridge in a low-carbon transition, and position gas as a destination fuel for the long term.”

Emails also show that some BP executives preferred not to emphasize the “bridge fuel” idea, for fear that it would “concede the point” that we’d eventually want to be off gas all together.

An array of studies, including from the United Nations and International Energy Agency, have found that the continued expansion of gas is incompatible with avoiding the worst outcomes of the climate crisis. “Natural” gas primarily consists of methane, a potent climate pollutant that heats the atmosphere more than 80 times more quickly than carbon dioxide. And it leaks (or is purposefully released) from the gas system constantly — from fracking wells when it is extracted, from the pipelines that transport it across the country, and even from the stoves in our kitchens. When all this methane is taken into account, studies show that it makes gas just as bad as coal for the climate.

The documents released by Congress show that this truth — that methane emissions undermine the supposed climate benefits that gas has over coal — doesn’t sit well with the industry. After an environmental advocate dared mention it in 2017, emails show Shell’s CEO Ben van Beurden said the idea was “disingenuous” and that he would be canceling a scheduled face to face meeting with the advocate in retaliation.

The documents also show that in private, the industry is well aware of the limitations of one of the technologies it promotes as a supposed solution for reducing the climate footprint of methane gas — outfitting gas plants with carbon capture and storage. BP commissioned a study that found that carbon capture’s high costs and technical hurdles make it difficult for the technology to compete with the more obvious solutions available right now — wind, solar and energy storage.

Another takeaway from the documents is that the industry sees its efforts to reduce methane emissions from the gas system as a strategy that will allow it to continue drilling and burning more gas in the coming years. American Petroleum Institute CEO Mike Sommers noted that reducing emissions from flaring presented “an opportunity to further secure the industry’s license to operate.”

The truth is that even if the industry was successful at plugging some leaks in its system, methane emissions are an unavoidable part of the gas system, and continued expansion of the gas system locks us into costly fossil fuel infrastructure that crowds out the real solution — clean electricity.

“Even though Big Oil CEOs admitted to my Committee that their products are causing a climate emergency, today’s documents reveal that the industry has no real plans to clean up its act and is barreling ahead with plans to pump more dirty fuels for decades to come,” Chairwoman Carolyn Maloney said in a press release.  “Today’s new evidence makes clear that these companies know their climate pledges are inadequate, but are prioritizing Big Oil’s record profits over the human costs of climate change.  It’s time for the fossil fuel industry to stop lying to the American people and finally take serious steps to reduce emissions and address the global climate crisis they helped create.”