You probably know what to do when you smell rotten eggs or sulfur in your home — get outside as soon as possible and call 911. There could be a gas leak, which can have deadly consequences. 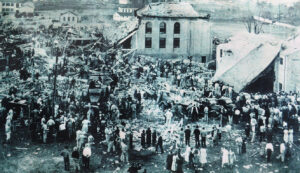 But did you know that the foul smell in “natural” gas isn’t natural at all? When gas is produced through drilling and fracking, it is completely odorless. To be sure people notice when gas is leaking, the industry adds an extra smelly chemical called mercaptan to its product before pumping it into millions of homes, schools and businesses.

But the gas industry didn’t take it upon itself to make gas smelly in the name of public safety. The government forced it to after more than 300 children and teachers died in a massive explosion in New London, Texas in 1937.

A gas explosion that rocked the country

At the time, New London was in the center of a massive Texas oil boom, which meant the region was swimming in excess methane gas, which officials tapped into to power the school. But gas did then what it still does today – it found a way to leak. The school’s crawl space filled with odorless, explosive gas. That day, students complained of headaches and burning eyes, but teachers were no help.

Then the gas found a source of ignition – a spark from a woodshop sander. The ensuing explosion could be felt 4 miles away and sent building debris – and childrens’ bodies – flying through the air. In the aftermath, friends and family picked through the rubble to try and identify their loved ones. 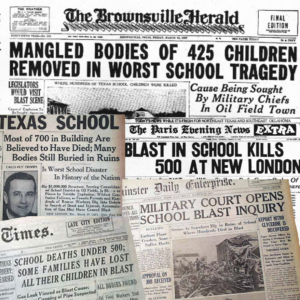 The New London School Explosion was a national tragedy. To this day, it is still considered one of the worst school disasters in history. As a rookie reporter, Walter Cronkite was sent to cover the incident for United Press. The trauma of the incident stuck with him for the rest of his life. “I did nothing in my studies nor in my life to prepare me for a story of the magnitude of that New London tragedy, nor has any story since that awful day equaled it,” Cronkite later wrote.

In response to the tragedy, the Texas legislature passed a law requiring gas sellers to make their product smell, so that people would be more likely to notice a leak before tragedy struck. Other states and the federal government followed suit, and to this day gas providers are required to add “malodorants” to their gas.

Gas is still a safety threat in our schools

But no matter what it smells like, the threats of gas haven’t gone away. Between 2010 and 2020, a gas accident causing major damage, injury, or deaths occurred once every two days on average in the United States, and that doesn’t even account for “behind the meter” accidents that occur in peoples’ homes.

According to the Energy Information Administration about half of schools in the country still rely on gas for space heating. In 2019, a gas explosion leveled a dormitory in the University of Nevada – Reno — the only reason no one died is that it occurred on a holiday weekend when most students were home.

Community advocates with Home Energy Efficiency Team (HEET) and Undaunted K-12 documented 91 gas leaks in Massachusetts schools in 2021, including 31 that were potentially hazardous and needed immediate attention. While all these leaks were promptly fixed, the prevalence of them shows that leaks are an unavoidable part of powering our schools with methane gas.

The good news is that we’ve got better options — schools around the world are being retrofitted to install electric heat pumps that reduce monthly energy bills and don’t carry the same safety risks as gas. If you’re interested in helping push for cleaner, safer energy in schools in your community, check out this comprehensive guide from Rewiring America on how to advance school electrification. It’s the least our kids deserve.